This is an attempt to trace the movements of the Currell family in the parishes around Hitchin from 1700 until 1900. The parishes include Hitchin, Ippollitts, St Pauls Walden, Kings Walden, Willian, Graveley, Norton, Kimpton, and Baldock.

My tentative contention is that William and Frances Currell (who both died at Willian, Herts in the 1760s) had several children. From three of these – William, John and Robert – most of the Currells around Hitchin descended.

Map of parishes around Hitchin with a Currell presence

The story of the Currells in Preston

News stories and other information featuring the Currells in Hitchin

Analysis and news stories about 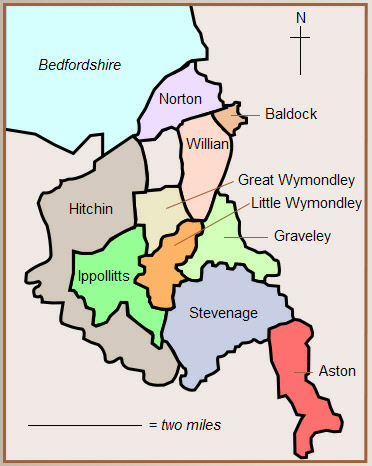 based in Stevenage, Hitchin and the Wymondleys, Great and Little. There were other parishes in Hertfordshire which also had a Currell presence – notably Hatfield – but I have yet to find a definite connection between these families and the Currells who lived near Hitchin.

Any search for Currells is hampered by the attempts of parish incumbents and census enumerators to spell the Currell surname – Coral, Corale, Correll, Currall, Cural, Carolle and Curle etc. (the last version perhaps

indicates how the name was pronounced). The quest has also not been helped by transcribers and indexers

who have further mangled the surname into sometimes incredible forms.

at Willian near Hitchin. This couple is literally the end of the line for I cannot find a record of William’s birth or their marriage, but at least we have three centuries of history of a family, many of whom were farm workers.

The missing link in my theory is the demonstrably imperfect parish registers of Willian.

Why may one conclude that the Willian data is flawed? From 1700 Willian parish records were clearly written

up in April from notes made during the year. Thus, the births were recorded firstly, then marriages and finally deaths for each year – these events were not listed separately, nor were they entered chronologically, thus a baptism at the end of the year would be followed by, say, the first marriage in June. This method of recording details may result in inaccuracies – some events may not be noted at the time and there could be errors in transcription from the notes.

The register is noticeably deficient from 1715 -1723. During this time, not one burial is recorded whereas during other years there were regularly between three and six deaths in the parish. From 1717 to 1721, marriage

details (in what appears to be different handwriting) are squeezed into the record and in 1715 two baptisms are crammed into the register without mentioning the names of the parents.

The reason for this lack of diligence emerges in 1725 because the incumbent clergyman, Thomas Ward, died

in June of that year. The register has a note that the clerk recorded births, deaths and marriages in a little book during the illness of the late clergyman. These notes were entered for 1724 -25 after Thomas Ward’s death.

One wonders how many events were not recorded in the earlier years.

All of this has a possible bearing on the parish record involving the Currell family. There is no record of the marriage of William and Frances in Willian or of the birth of a son christened William. The first record of a

Currell in Willian is that of the baptism of Thomas Currell in 1720 (son of William and Frances).

A likely scenario is that William and Frances were married in Willian between 1715 and 1721 and had a son, William, but that for the reasons explained above, no records of these events has survived. The alternative is

that the marriage and birth took place in another parish – but cannot be found.

descended from William Currell who was married in 1747 and was therefore likely born around 1722. I believe

of the birth of a William Currell in Willian (or any other parish at this time).

I also believe that of William and Frances Currell’s sons, John was the first Currell in Aston, Herts and Robert Currell (who married in Graveley, near Hitchin) was the ancestor of the Currells who lived at Hill End, Preston

The reason for this exodus from Willian is obvious. The parish had a population of only 293 in 1841. Thus, the essential prerequisites of jobs, potential marriage mates and homes were of limited availability in the village. As

a result, some of William and Frances children  moved a short distance to nearby parishes.

Explanatory information re: the links at the top of the page

There is a tree showing William and Frances’ children. Four more family trees feature (1) the Currells in Preston/Hitchin, (2) Aston, (3) Norton and (4) Willian. Certain members in the trees have been assigned a number and there is a separate file of my rough working notes which relate to the numbered individuals. Finally there are pages dealing with the news stories involving the Currells in Hitchin and Norton which help the family to ‘come alive’. The links to this information are at the top of this page.

If you have any comments or corrections about these details please let me know. Link: Contact Page.

I would also like to build a file of Currell photographs on this site. If you have any photos you would care to