A brief history of Temple Dinsley
1100 - 1800
Although we are focusing on Preston’s history  from 1800-1901, the following is a brief account of Temple Dinsley until the nineteenth century.

The estate of Dinsley was given to the Knights Templar in the twelfth century AD. They were a group of wealthy warrior monks dedicated to keeping the highways of the Holy Land safe for pilgrims.

The Knights built a preceptory on the site - Temple Dinsley. This was a cross between a monastery and a manor. It became their most important estate in south-eastern England.

Later, in 1542, the manor was granted to Sir Ralph Sadleir - a servant of Henry VIII.

In the sixteenth century, Temple Dinsley was sold to Benedict Ithell. On his death, it passed to his sisters, one of whom bequeathed the estate to her steward, Thomas Harwood.

The Hertfordshire Militia List s provide striking evidence of Thomas’ social elevation. From 1758-65 he is described as a servant, gentleman’s servant, and even, labourer. Then from 1768-73, he is Thomas Harwood - Esquire!

When Thomas died in 1786, he left Temple Dinsley to a young nephew, Joseph Darton. In turn, Joseph was succeeded by his son, Thomas Harwood Darton.

The sale of Temple Dinsley in 1874

When the estate of Temple Dinsley came onto the market in 1873, the sale particulars provided a wonderful description of the estate and its various parts (even allowing for the agent’s enthusiasm).

Illustrating the way in which Temple Dinsley dominated Preston is the statement that for sale was ‘nearly the entire village...about forty cottages and The Chequers Inn public house’.

The estate occupied 560 acres of ‘very fertile land’ nearly all of which was freehold and tithe free.

Temple Farm (in the grounds of Temple Dinsley)

These farms together with the mansion provided employment for many of  the villagers.

The house was described as a ‘fine, old mansion’.  It had a spacious hall, drawing room, billiard room, dining room, morning room, study and gun room on the ground floor - all of which were centrally heated (in 1873!).

On the next floor were seven bedrooms, three dressing rooms, a bathroom and two toilets.  The roof space was occupied by six attics.

Temple Dinsley 1920c after the additions by Sir E. Lutyens

Attached to the house was a large pavilion, a butler’s pantry, a kitchen, dairy, laundry and wash rooms. The outbuildings included stables (above which was an eight-day turret clock with four faces, shown above), two carriage houses, a mushroom house and a small homestead.

The ‘Temple Clock’ (as it was known ) regulated the lives of the villagers. During the Preston Hill Robbery case of 1864 there were no less than three references to the clock, which helped to establish time frames. From these comments, we learn that the clock could be seen from Preston Green - ‘It was about five minutes to nine by the Temple Clock’ - and that it could be heard at the bottom of Preston Hill. The clock was destroyed by fire in 1888. The fire was reported in the Hertfordshire Mercury:

Notes on hunting and shooting

When the sale of Temple Dinsley was advertised,  its agricultural potential was not promoted. The selling point was the opportunity for field sports such as the hunting and shooting of foxes, pheasants,partridges, rabbits and hares. ‘It is in a favourite hunting district....the sporting capabilities are of a high character and afford excellent partridge and pheasant shooting’.

This emphasis on hunting helps us to understand why the  woods around Preston survived. While there was some revenue from the sale of rights to coppice trees, the woods were mainly preserved as the haunt of wild-life which could be hunted.

The Cottage aka The Dower House

The Cottage was built on the north-east side of the estate, near to the Hitchin road. Today it is known as ‘The Dower House’.

Occupants of the Cottage:

Henry Anstruther (Lord of the Treasury)

Temple Dinsley was sold to Major Henry Pryor of Clifton, Beds. His sons, Ralston de Vins (RDV) and Geoffrey  Pryor (GIE) were later involved in the running of the estate and  collecting rents.

It is interesting that according to the 1871 census, Major Pryor’s household at Clifton included a visitor, William H. Darton, who was born at Kings Walden, Herts. Henry Pryor (31) and William (28) were serving as Captain and Lieutenant in the 7th Bedfordshire regiment. Two years later, Henry had purchased Temple Dinsley from William’s father,  Captain Thomas Darton. 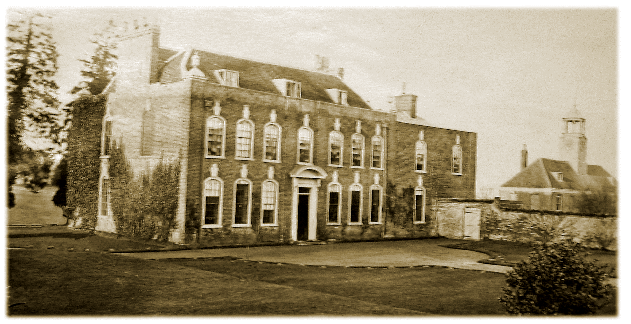 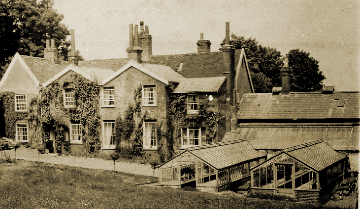 FIRE. Early on Wednesday morning the brigade was called to a fire at Temple Dinsley, the residence of the Hon. H. Brand. On their arrival they found the coachman’s residence, stabling, coach house, fowl house and other extensive outbuildings, one mass of fire. The brigade quickly set to work with their steam machine to prevent the fire extending to the house, which they succeeded in doing. It appeared there had been a fire in the chimney of the building the previous afternoon and it is supposed this was the cause of the outbreak. Six horses were saved but the fire spread with so much rapidity that it was impossible to save anything else. The furniture in the coachman’s house was all destroyed with a large quantity of hay, straw, harness, a stack of hay and several carts.  (May 1888)

Penny Causer has kindly provided the above post card showing an unusual view of Temple Dinsley. It was sent by Laura Bertram Cannon, the daughter of Francis Cannon the wheelwright at Preston Green.