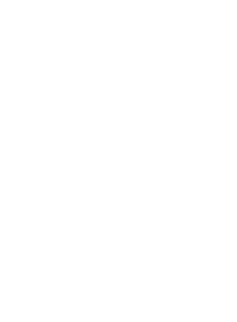 A cottage has been demolished by 1898

Judging by his neighbours in 1871, Joseph Wilson was probably living in the area around Preston Green with his mother, Eleanor and sister Ellen. Eleanor died in 1872 aged 67. David and Mary Scrivenor died in the late spring of 1877 aged 74 and 81 respectively. They were succeeded at “The Wilderness” by Thomas Smith, a elderly farm worker from St Albans, his wife, Mary, and daughter, Ellen.

When Thomas and Mary died in December Quarter 1894 and the late spring of 1892 respectively, their daughter, Ellen , remained at the property and was  joined by her sister, Annie Sharp, and her Preston-born husband William and daughter May. they were still at the property in 1901.  The industry associated with the house was maintained as William was a boot-maker and the sisters were self employed dressmakers.

It is probable that the Wilson (aka Wilston and Wilstead) family of wheelwrights lived at this cottage from at least 1841-61. Thomas Wilson (wheelwright b 1780c) and his wife, Mary, married on 14 December 1797 at Offley. They were living at Preston in 1806 when there were seven in their household .

Thomas died in 1842. From 1851-61, Thomas’ son, Daniel (baptd. 1809, Tilehouse Baptist Church, Hitchin) was certainly the wheelwright in residence at the cottage. With him were his wife Eleanor and children, Ann and Joseph.  Eleanor worked as a dressmaker and shirtmaker. In 1841, Daniel was a wheelwright at Lilley Bottom in Kings Walden.

By 1861, their daughter Ann had married James Day, a tailor from Baldock and the couple were living with Daniel and Eleanor. Ann was bonnet sewer, so the cottage would have been a hive of activity.

Eleanor Wilson was a widow in 1871 so Daniel died between 1861-71. Although his son, Joseph Dines Wilson continued the family tradition as the third generation of Wilson wheelwrights in Preston, it is unlikely that he traded at ‘The Wilderness’.

From 1871-73, David and Mary Scrivenor from Kings Walden were living at the cottage and he was also a wheelwright.

The southernmost cottage of the trio was located not in Chequers Lane but in Butchers Lane. It still stands today and is known as, ‘The Wilderness’. It also had a wooden frame, a roof of small red tiles and today the walls have been rendered. In 1873 it was described as having three rooms, a bake house and a wheelwrights shop which helps to identify its occupants.

Meanwhile, at the cottage at The Wilderness, Joseph Sanderson had died  in the late spring of 1872. His widow, Hannah,  was still in residence the following year when the Temple Dinsley estate was sold, but she died in 1879.

By 1881, the cottage was occupied by farm labourer, Joseph Burton, his wife Catherine and their five children.

In 1886, the widow, Emma Marriott was living alone in the cottage; her two daughters being in service. Emma and her late husband, Stephen Marriott, had worked nearby Castle Farm since the 1860’s until Stephen’s death in the late winter of 1883. Emma was a Baptist, indeed in 1881 the census recorded that Mary Hudson, a Weslyan minister’s wife, was residing with Stephen and Emma at Castle Farm. This was entirely appropriate as historically, Castle Farm had long been associated with the Weslyans.

In 1891 -1901, Emma was still living in the cottage having been joined by her daughter, Mary. They were recorded as ‘living on their own means’. It was probably Emma who christened her home, ‘Rose Cottage’ as the first mention of this name I have found was in the 1910 Rates Book. Emma Marriott died in the late winter of 1908.

The cottage nearest Castle Farm was in Chequers Lane. It had four rooms and was constructed from bricks in a wooden frame and small red roof tiles.

The junction in Preston village where  Charlton Road meets Chequers and Butchers Lane was known as ‘The Wilderness’ in the nineteenth century.

It was a busy corner. Although only three cottages stood there, two of them were shops where a wheelwright and a tailor plied their trade. The plot occupied by the cottages measured one acre, three rods and 38 perches. In 1873, a tithe of 11s 6d and rent of about £19 4s 0d was paid annually for the entire plot. It was part of the Temple Dinsley Estate.

By comparing the details of the 1891 census (which recorded the number of rooms in the homes) with the description of the cottages when the Temple Dinsley Estate was sold in 1873, it is possible to establish who lived in which home during the 1800s. According to the Bill of Sale only one cottage had four rooms. This same document also mentioned that the property was a shop (tailor) and in 1873 was occupied by Hannah Saunderson. Furthermore, the Bill of Sale describes another cottage at the site. It was the hub of a wheelwright’s operation and this was occupied by David Scrivenor in 1873.

Joseph lived with his wife Hannah and daughter, Hannah Harriett, who was born in Preston and baptized at Tilehouse Street Baptist Church in1837. Hannah, junior, married the butler Daniel/David Frost and they and their five young children were living in the cottage with her parents, Joseph and Hannah, in 1871.

In 1881, the Frosts had moved to Chequers Lane but David was absent. The 1886 religious survey of Preston notes that Hannah and David Frost were Baptists and that David, “lived in London”. Indeed in 1881 he was serving the physician, Charles Hare, at 57 Lower Brook Street, Westminster.

David Frost died in the late winter of 1899 and two years later his widow, Hannah Harriett was the Preston post mistress at ‘Spindle Cottage’ on the Hitchin Road at Preston. 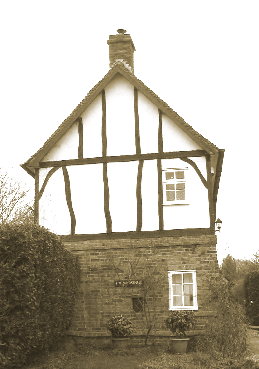 The middle cottage of the three did not survive into the twentieth century, which probably indicates its state of repair. It had three rooms and a cellar. From 1851-71, the agricultural labourer, John Sharp (b Preston 1816c) lived there with his wife, Mary and seven children.

By 1881, their place was taken briefly by Amos and Elizabeth Fairey and their two children. Five year later, Job Jenkins lived alone in the cottage and by 1891 it appears that the cottage had been demolished.

Rose Cottage and The Wilderness in the twentieth century 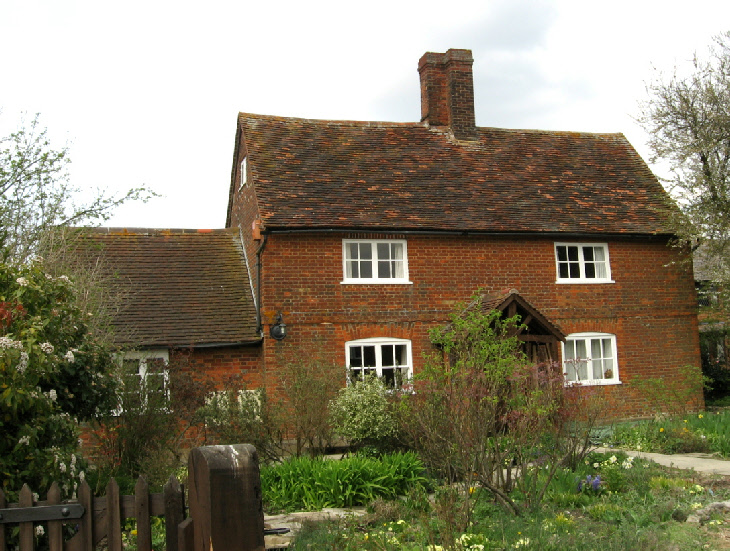 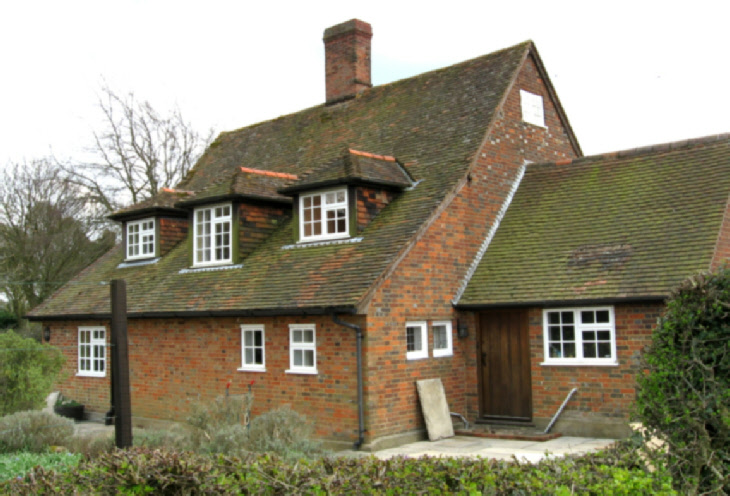 In 1901, Rose Cottage was owned and occupied by Emma Marriott, a seventy-nine-year-old widow who lived there with her spinster daughter, Mary (45). The property, which was ‘old  but in fair repair’, comprised of a living room, kitchen, scullery, three bedrooms, two attics and a wood/thatched barn.

It was assessed as having an early eighteenth century exterior to what was probably an older house. It was built using red narrow bricks in  a Flemish-bond and probably as casing to timber frame. Also in the eighteenth century, a short service wing was built on the west side which was set back from front and large catslide rear outshut which was rebuilt in the twentieth century with 2 hipped dormers on its roof. The south front had a low stucco plinth, plat-band, 2 windows to each floor, with a door between, and gabled timber porch.

Emma Marriott died in 1908 and her daughter Mary (who had ‘private means’) continued to live at the cottage with her teenaged niece, Mary Elizabeth Brown, for company in 1911. Emma was still there in 1914, but in December 1917, George Hobbs and his young family from London occupied the house for a fortnight or so.

In the Spring of 1918, Bertram and Nellie Moore were the new owners. They were in their early thirties and had a young son, Bertram junior. Bertram snr was born at Aston in Warwickshire and worked as a manager and traveller for the Mutual Benefit Stamp Company.

By 1924, Rose Cottage had new occupiers - Bernard Daniel and Florence Hayton who had moved from Shillington, near Hitchin. Bernard had been a Major in the Royal Army Pay Corps between 1914 and 1922. 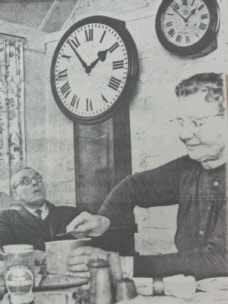 In 1934, forty-year-old London company director, Frederick Oxley Blanchard and his wife, (Constance) Eva (right), were ensconced in the cottage they were to claim was originally built before 1620 - they were to live there until the mid-1980s.

Frederick was the Chairman of the Preston Parish from 1939 to 1945 when he resigned as a protest against the action of the Housing Committee of Hitchin Rural District Council. This appears to typical behaviour by Frederick and Eva - ‘they established themselves as two of Preston's rebels. They don't retire from committees, they resign. ‘We may be a bit of a nuisance.but if something in the village is wrong we kick up a fuss until it’s put right,’ said Mrs Blanchard. A colleague on the parish council gave a wry smile when the Blanchard name was mentioned. ‘Oh yes,’ he said. ‘they stir things up occasionally, but they have the interest of the village at heart and they are usually right.’

Frederick died at Stevenage in early 1979 and Eva in January 1986 by which time, Elizabeth Hunter was living at the cottage.. 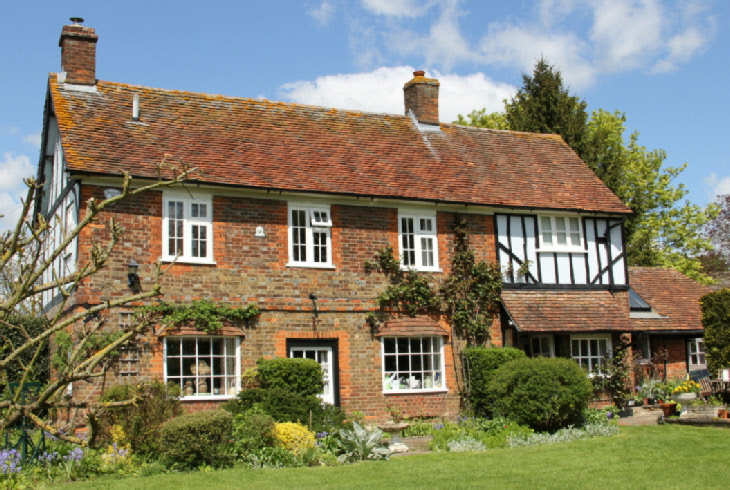 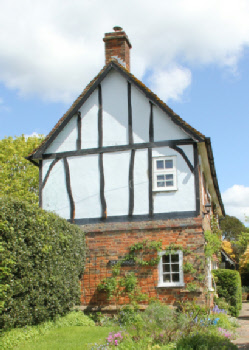 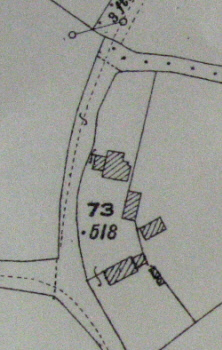 The Wilderness was built in the early 1700s and has extensions to the east built in the eighteenth and nineteenth centuries. It is constructed in plum brick in a Flemish-bond with red dressings. Roughcast has been applied to the first floor of extension and half-timbering to the front and upper part of west gable end. There is a Sun fire insurance plaque attached to the front of the cottage, which can be seen in the photograph above.

In 1910, the cottage consisted of a living room, kitchen, scullery, three bedrooms and a barn and was described as being in ‘ fair repair’. 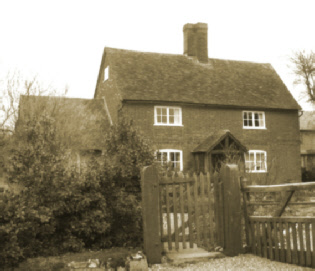 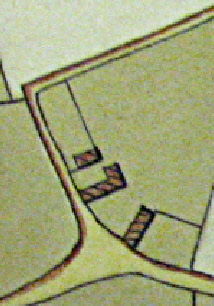 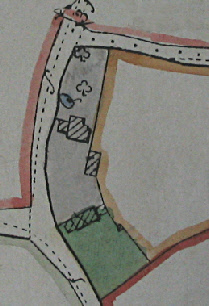 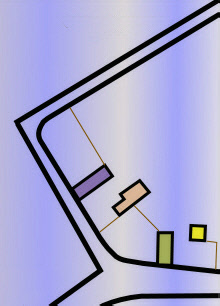