I went back home to Preston, to the place where I was born

To see if there were cornflowers, still, and poppies in the corn.

But as in other places there were changes to be seen

And where the scarlet poppies grew, now barley reigned supreme.

The world at large, our secret way, that leads to Bunyan's Dell.

The Bothy still looks much the same, but do the violets grow

In wild profusion ‘neath the hedge the same as long ago?

For whenever I see violets it seems but yesterday.

I noticed now, the pond was gone. The rails held nothing more

Than a little patch of ground which stood beside the college door.

But the elm trees I was looking for were nowhere to be seen.

Had disappeared; and in it's place, a notice rather bleak

Saying 'Bus stop' with a list of times the bus comes through each week.

Across the other side I saw the village pump still stood

In stoic resignation there as if it always would

Saying to the villagers "You may have 'H' and 'C'”

And showers and coloured basins, but it doesn't worry me.

And many are the secrets which were shared beside the well."

But what about the chapel where we went week after week

Mum and nine or ten of us to fill two rows of seats.

With Florrie Cannon at the organ in her Sunday hat

And Ernie in the congregation, singing rather flat.

Now they've gone to Glory and the Browns have moved away

And the chapel has been sold out to some businessmen, they say.

And is it true, the little church, where with the school we went

Upon Ash Wednesday every year, to mark the start of Lent

Is very seldom open; Walter Peters, are you there?

Or the Palmers or the Currells, is there nobody to care?

O'er the gravestones so symbolic of the transience of time.

A little further on, the final denigration came

I saw a notice, 'Butcher's Lane', as if we didn't know

That road was known as ‘Butcher's Lane’ a hundred years ago?

And insult piled on injury, the banks had all been mown

I much preferred them in the days when they were overgrown

All cradled in a cowslip leaf, to give to Mum for tea.

For every place in which we stay, we like to make a change

And then those coming after us will always rearrange.

All the generations which were there before we came

Would, if they could come back again no doubt feel just the same.

So, would it not be better if we never did retrace

Our footsteps back to childhood; for if we find the place

Is full of alterations and the meadows which were ours

Are covered up with concrete paths instead of summer flowers

We only want to hurry home, forget the things we've seen

Lest upon our reminiscences these things should intervene.

In memory we can go back, the images remain

Locked in our hearts forever and the places stay the same.

The pettitoes are growing in the meadow by the wood

The sycamore is standing in the place it always stood.

There are buttercups and quaking grass and poppies in the corn.

But progress is progress and time marches on

And it's no use sighing for the days which are gone.

Some things will change and others will decay

But the word of the Lord will never fade away.

And those mansions in Heaven on that bright shining morn

Will be fairer by ten thousand than the poppies in the corn.

I remember. I remember, when the country went to war

When the threat of Nazi Germany was shadowing our shore

“The British Isles is now at war" upon that warm September day.

Cheery, sad, some poorly clad. We eyed the strangers up and down

Country children out of danger. Cockney kids from Canning Town.

I remember, I remember - was it fifty years ago?

How everybody pulled together then against the common foe

‘Save-not spend’, ‘Make do and mend' and 'Dig for victory', they said

How little waste there was in those days, how valuable a loaf of bread.

Army lorries on manoeuvres; Blenheim bombers in the air.

Off to fight for king and country in the war against the Hun.

I remember, I remember when it wasn't really strange

To see an air-raid warden call and hastily to rearrange

The blackout curtain, just In case the man should see a chink of light

Giving signals to a German overhead at dead of night.

I was just a schoolgirl then and - well, it has to be confessed

I didn't mind, when in the middle of a horrid history test

As we hurried to a safer place for fear of falling glass.

I remember, I remember how the village was bereft

Ken and George and Dick and William; Cousin James and brother Jack

All received their call-up papers. Many never did come back.

I remember. I remember just before we went to bed

Standing on the lawn and watching as the distant sky turned red.

Not alas the evening sunset; this was London in the blitz.

Only thirty miles from us were people being blown to bits.

I remember, I remember how the chiming of Big Ben

Reverberated round the room as Dad turned on the news again.

Parents' thoughtful sombre faces as they heard how planes were lost

And again I can remember being frightened as I saw

For when the engine coughed and cut out, then the dreadful thing would drop.

How the British people gathered for a national day of prayer.

Backs were up against the wall and situations such as those

Was the apple blossom blooming sweetly on the orchard bough?

Were the willow and the chestnut lovely then as they are now?

Did the bright clematis gambol gaily round the cottage door

And did the blackbird sing it's heart out just as though we weren't at war?

Yes, from what I can remember, as I look back and reflect

Heartbreak, death and devastation on these things have no effect.

God has set the world in motion. Man alone is given a choice

Nature follows His instructions. Man can just ignore his voice.

I remember, I remember that Tuesday on the eighth of May

And how the world was given the tidings. “Peace at last. 'Twas Victory day"

Church bells rang, bonfires were lighted, There was dancing in the square

"Now thank we all our God" we sang - and many people left Him there.

Once again we need to gather, crying out 'What have we done,

What has happened to our nation since the war was fought and won.’

Then we turned to God to save us in our time of desperate need.

Now men worship other gods and follow in another creed.

The lesson seems to be forgotten, That is why the memory

Must be preserved if only as the guardian of our liberty;

But the words our dear King gave us, that first Christmas of the war

Still apply to all of us today as ever did before.

And he replied “Go in the darkness. Place your hand in that of God.

It shall be a better light. Safer than any path you’ve trod”

Followers of this web site and readers of the Preston History book may well remember Rebecca. She described so vividly what life was like at Preston during World War Two. Link: Rebecca and WW2

Rebecca has written two poems which capture her thoughts on returning to Preston twenty years after she had left the village and the effect of World War Two on the village. 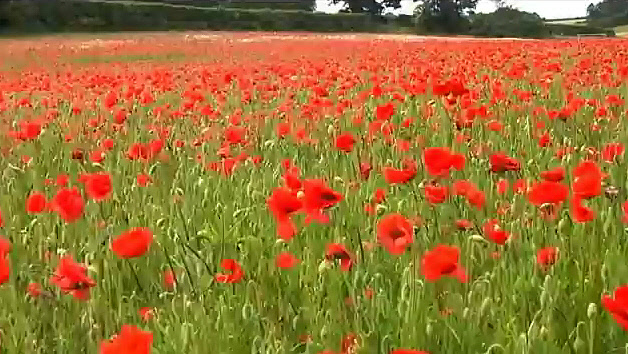 Rebecca adds, “...calling my book of poems, “Poppies in the Corn” is a bit sentimental but that was in the days before we had sprays to kill them off - pretty as they are, where there are poppies, there is no wheat and one special field which we cycled by on the way to school, every year war ablaze with poppies. Both of the poems were written about twenty years ago.............when I said in the “All Change” poem that I wished I could have ridden my bike up Preston Hill, I meant that although we biked into Hitchin every day to the Grammar School and whilst my brothers and other lads had gears on their bikes, I didn't - and always ended by dismounting and pushing my bike to the top coming home.’

More of her work can be seen by clicking this link: Rebecca’s web page)

A comment from a contemporary - WD: “Oh Philip, "delightful" simply does not cut it. They are, in my opinion, absolutely brilliant and evoke very clear and wonderful memories. Her "All Change" I loved because I went all the way to Preston with her, the field of poppies and having to walk up the hill pushing my bike. The church which is seldom open (I have actually never been inside it!) and walking through the lych gate and through the avenue of yews. "In memory we can go back"  I think she is right, memories are better , locked in our hearts forever and things stay the same.

“I Remember,” which brought many memories. The evacuees, my long lasting friendship with one of them who remained in Hitchin and died just last October. I remember too Wailing Willie sounding and we all had to troop to somewhere safer than the classrooms - don't think it happened often enough for me because I hated school! I certainly remember the night my mother woke me to see on the horizon the glow of the London blitz, she told me I was watching history.  I remember too staying with a friend overnight and watching a doodlebug fly through the sky, I believe it came down somewhere near Charlton. And of course I remember Victory day, I too was in the square, along with my recently dead friend, singing along to all the music with St Mary's illuminated in the background.  No, so very much more than “delightful”!