Ten years later, 234 of the surviving residents of Preston in 1841 were still living in the village. Where were the remaining 188?

Eighty-one cannot be traced. Many of these were not ‘rooted’ in the village. They did not inhabit their own cottages as they were the apprentices of tradesmen or ‘living-in’ farm servants. As the 1841 census does not state their birthplace or precise age, it is difficult to find them in 1851.

Of the rest, 82 were still living within five miles of Preston - in the surrounding villages and Hitchin. Another 15 had relocated farther afield in Hertfordshire - John Joiner and his family moved ten miles to Wheathampstead via Gaddesdon. Charles Walker (b 1823), the son of Jonathan and Ann, traveled even further away - in 1851 he was a coachman in Cuckfield, Sussex. Another ten  villagers moved out of the county.

During this decade there was no perceptible move from the countryside into towns. Seventeen “Prestoners” moved to Hitchin including seven members of the Saunders family from Poynders End who were living at Lyles Row. David Morgan began a grocery business at Bridge Street, Hitchin. Three more villagers moved to Dunstable and two relocated in Luton. Only two - James Boston and Jabez Squires - were living in London in 1851.

With few exceptions, the villagers who moved away continued to work in agricultural occupations. But George Swain (b1828) was working as a bonnet blocker at Dunstable in 1851.

Mary Jeeves was the oldest inhabitant - when she died in June 1853 she was aged 84. The youngest villagers were two boys who were one month old - George Fitzjohn of Kiln Wood and Elijah Peters who lived at Preston Green. A high proportion of villagers were aged  between one and twenty years - 49%.

The 1851 census was taken on 30 March. There were 464 inhabitants in Preston divided between 227 males and 237 females. They were living in 82 homes - an average of 4.9 people to a cottage. Two houses were uninhabited. There were also households at six farms, Temple Dinsley and ‘The Cottage’.

Clearly illness in a family could affect other children.

This census also included details of nine incapacitated villagers - many of whom would have received poor relief. They included my second great grand uncle, Thomas Ward, who although only 35 was, ‘Ill and relieved’ and his crippled 14-year-old son, William. Thomas was to live until he was 82 and worked for the rest of his life - as a marine store dealer, hawker and finally as a grocer in Luton. Thomas Palmer (80) was described as a ‘pauper’ and Thomas Winch (76) was ‘past work’.

The 1851 census included the occupations of children and females. There were 97 straw-plaiters. The oldest of whom was my great x 3 grandmother, Jane Fairey. The youngest plaiters were three-year old boys - Peter Peters and Amos Sharp. There were 80 female plaiters. The seventeen male plaiters were aged under 10 (apart from the 11-year-old George Scott) - which suggests that the preferred occupation of male teenagers was on the land.

A quarter of the village was comprised of six families:

The most popular Christian names were:

Link to transcription of 1851 Preston census.

Link to alphabetical list of names in 1851 Preston census. 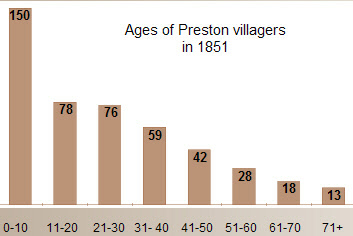