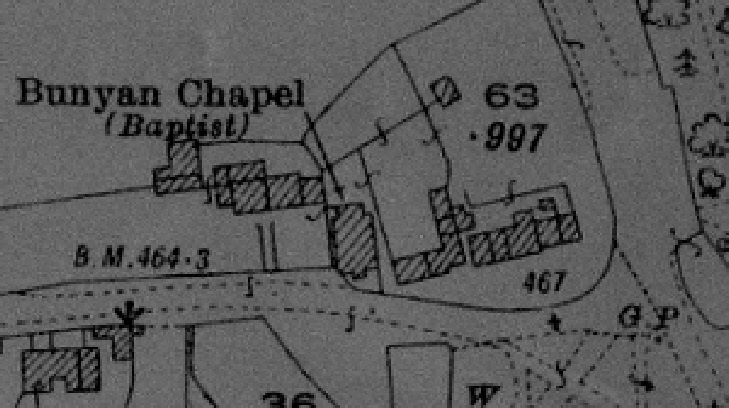 Cottage on the corner of Church Lane and Hitchin Road

1710 - Inherited by Cornelius Oakley (on death of mother, Alice)

1719 - Passed to William and Mary Oakley by Cornelius

1747 - Sold to Robert Munday, innholder of Hitchin and then of Watton, Herts, yeoman.

1786 - Sold to Joseph Pedder snr., carpenter of Preston (with its outhouses, barns and waterways).

1811 - Joseph Pedder jnr. sold this property and ‘the newly erected cottage where a barn had previously            stood and which connected’ to William Sheaf.

Above: the row of five cottages on the north side of Blacksmith’s Lane/Kings Walden Road

Cottage 1     Built of brick and tiles, it had a kitchen and two bedrooms. In 1910 it was in poor condition.

From before 1836 this cottage was the home of shoemaker Thomas Field (born 1790) and his wife Ann (nee Pedder). They died in 1853 and 1852 respectively while living at the cottage.

Peter Peters and his wife Isabella (nee Burton) married in 1870 and they were certainly living at this home in 1873 until 1911. However by 1915, Peter was living at Back Lane, Preston.

Cottage 2 Built of brick and tiles, it had a kitchen and two bedrooms. In 1910 it was in poor condition.

The next tenant who can be identified there is James Mead, a farm labourer born at Ippollitts in 1805 who married Jemima Saunderson. James was living in the cottage in 1847 and 1851.

Cottage 3 Built of brick and slates, it had a kitchen and two bedrooms. In 1910 it was in poor condition.

Daniel (agricultural labourer) and Elizabeth Fossey lived here from around 1836 until at least 1841. However, they had moved to Gosmore by 1851.

By 1881, Peter Peters (bn 1848) and his wife Isabella (nee Burton, who married in 1870) were living in the cottage and they remained there until around 1911 when they moved to Back Lane. Thomas French took their place.

Cottage 4 Built of brick and slates, it had a kitchen and two bedrooms. In 1910 it was in poor condition.

Elderly farm worker, farm worker John Jeeves and his wife, Mary (nee Warff/Warp) were settled here from before 1836 until around 1848 when John died. Mary then lived at School Lane until her death in June, 1853.

Charles Thrussell (hay binder in 1858) and his wife, Sarah (nee Jenkins) lived here probably immediately after their marriage in 1879 until the early twentieth century when they moved to Charlton, Herts in 1911.

Their place was taken for a short time by woodman George Andrews and Adelaide (nee Burton) but they had moved to Back Lane by 1920.

Cottage 5 Built of brick and slates, it had a kitchen and two bedrooms. In 1910 it was in poor condition.

The widow Hare lived here in the late 1830s until farm worker Henry and Elizabeth Stratton (nee Pratt) moved in soon after their marriage in 1837. The couple remained there until their deaths in 1878 and 1893 respectively.  Elizabeth organised a plaiting school for several years. The school is marked on the 1884 sketch map of Preston, though it is hard to decide exactly where the school was held. Behind their cottage was a thatched barn (see below). Perhaps the children sat there to learn their craft. 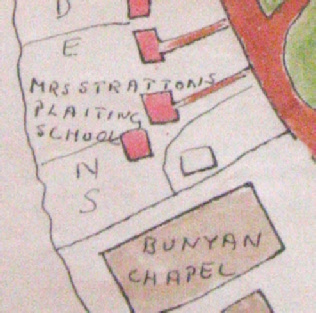 In 1911, Arthur Ewington was living at the cottage, though curiously his name was crossed through in the records and Ashton substituted. This entry is confirmed in a later unrelated record. Which of Tom Ashton’s children lived here?

The two cottages immediately to the east of Bunyan’s Chapel

will (dated 1693, which was proved in 1705 and by which he inherited other property in Stotfold, Beds.)

When she died in 1757, according to her will her property (which included a cottage in Preston) was to have been divided between her two surviving sisters, Hannah Biggs (wife of William) and Ann Brown (wife of William Brown, a labourer of Knebworth, Herts). Ann Brown was the sole surviving daughter of John and Mary Heath in 1757 and so inherited the cottage at Preston Green outright.

The cottage next appears in the manorial records in 1793. They state that John Brown, labourer of Little Munden, Herts., sold the cottage (to which he was admitted in 1778) to William Almond. It had been occupied by James Sharp ‘and now (in 1793) William Almond’. Its manorial rent was 4d.

The sequence of events seems to be that John and Ann Brown had a daughter also named Ann Brown (born circa 1738). She married the cordwainer William Almond in October 1761. William and Ann Almond died in 1805 and 1819 respectively.

There is a hard-to-read pencilled note in the manorial record that indicates the property was sold to William Sheaf in 1816. This  explains why the cottage is grouped together with the five neighbouring cottages in the Award of 1811-1816 as ‘sundry cottages belonging to William Sheaf’. He eventually sold the cottage to Thomas Harwood Darton as part of the  ‘other tenements at or near Preston Green’ in 1835.

The occupier of this property was Charles Hill in at least 1801 until 1812. Then from before 1836, the shoemaker. Thomas Wilson (born 1786c) was in residence until his death in December 1848. His son, Thomas Wilson jnr, then lived there until the early 1880s.

In the meantime, the ownership of the cottage had changed. It was evidently included with the sale of the land (probably by the Pryor family) when Bunyan’s Chapel was built in 1877 for in 1910 it was owned by A E H Theobald of 72 Bancroft, Hitchin who also owned the Chapel.

Mrs Mary Bushell (the mother of Emma Scott who lived with her husband William in the adjoining property [see below]) then moved in until her death in 1906 when she was aged 85.

Josiah Pruton was the next tenant to be recorded briefly - from 1910 until he and his family left Preston in September 1914. The cottage was described as being brick and thatched with a kitchen, pantry and two bedrooms. It was in poor repair.

1664 - Owned by Richard Whitely according to the Temple Dinsley Survey of Rents. Rent 4d.

1677 - Occupied by Widow Bridgen(s) and sold to Richard Dearmer

1706 - Occupied by Paul Williams and sold to Leonard King (wheelwright of Ippollitts) and his wife Elizabeth.

1712 - After death of Leonard King, Elizabeth transferred the cottage to their son, William King, a victualler of            Walkern, Herts. It was now occupied by Widow Dunham.

1793 - Sold by John Swain to son,William Swain. It was described as ‘formerly of Paul Williams, late of

the cottage was taken over by their son William Scott and his wife Emma. They died in 1930 and

1924 respectively. The Scott family are featured in this article: The Scotts of Blacksmith’s Lane

In 1910, this cottage (which was at least 246 years old) was described as brick and tiled with a kitchen, washroom and two bedrooms. A descendant of the Scotts added this description: ‘I lived in a little cottage called Rose Cottage, which faced the side of the Bunyan Chapel. The cottage was of clapboard construction and had a barn attached to one side, with a bedroom built over the barn’.

When were the seven cottages described above demolished?

It is difficult to be certain from the records who lived in these cottages after 1915. However, they had all been demolished by 1937 to make way for the building of Preston House (shown below),  which together with its garden now stands on the land occupied by not only these seven cottages, but also the two cottages which stood on the corner with the Hitchin Road.

There is a letter which mentions that Preston House was built and designed by Alfred D Allington in 1938. ‘It is built on a site occupied by five cottages in 1937’. Taken at face value, this may indicate that the two homes immediately beside Bunyan’s Chapel were demolished after the death of William Scott i.e. between 1930 and 1937. 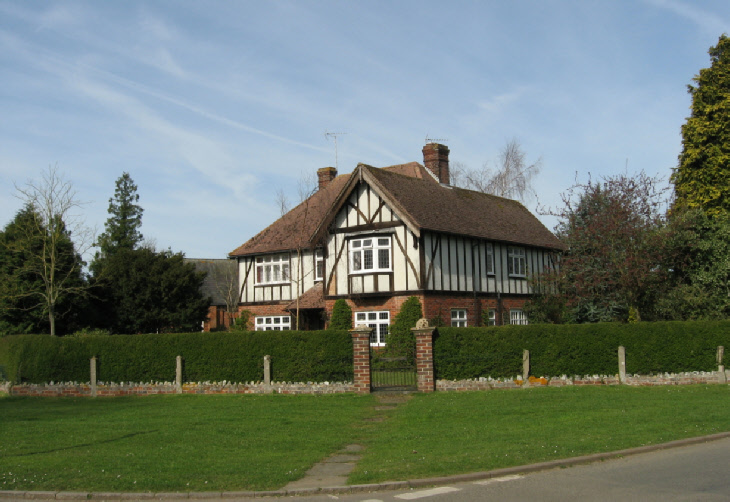 The occupants of Preston House

In 1914, Frederick was a 2nd Lieutenant in the East Anglian Brigade of the Royal Field Artillery. He was awarded the Military Cross for this act of bravery: ‘For conspicuous gallantry and devotion to duty. Whilst moving to take over the right half of the battery which was being heavily shelled, he was hit and knocked over by a piece of shell. Although badly shaken, he returned again to the guns and succeeded in completing the firing of a barrage’.

During the WW2, he served again with the RFA with the rank of Major.

Frederick was an economist in peacetime, writing articles such as ’Devaluation of the Franc’. He was also Chairman of Lindridge Estates Ltd.

Both Frederick and Caroline are buried in the graveyard of St Martin’s, Preston.

John Patrick resided at Preston House in 1961 and 1971 after which its occupants were Malcolm G and Patricia Blaza. 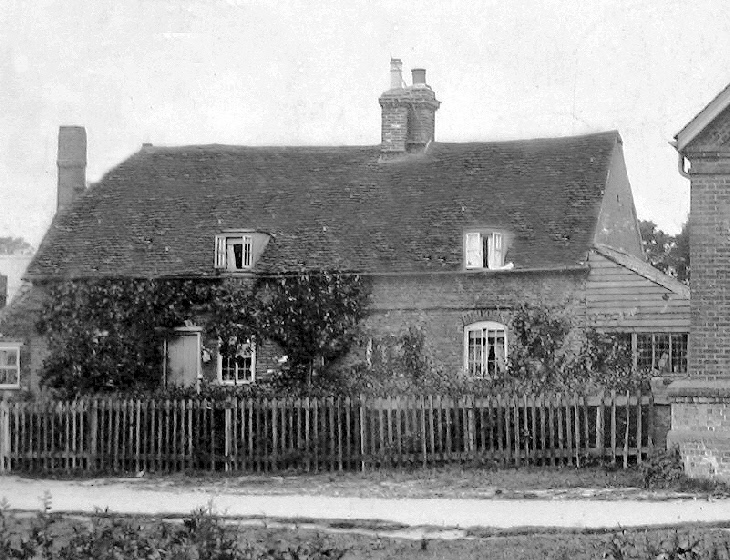 1664 - Survey of Temple Dinsley Rentals: owned by Frances Bowstred, a widow. Rent 3/-. One of two

properties she owned with a combined rent of 4/-)

1797 - Bequeathed by Daniel Joyner (the cottage in which he dwelt) to Henry Pedder.

1837 - Beer shop, ‘Horse and Groom’, run by Charles Swain and owned by Marshall and Pierson.

In 1910, (see 3781 in 1898 map above) the property was occupied by George and then Hubert Peters. It was described as a brick and tiled cottage with a kitchen and two bedrooms.  It was in poor condition. They were demolished before the other cottages along Church Lane, as can be seen from the photograph immediately below. Chequers Cottages (which were built in 1913/14) can be seen in the photograph,  so it was demolished after 1913.

This was the cottage immediately to the north and adjourning the home described above. It was probably built in the 1690s. First owner: John Bowstred snr.

1750 - Owned by Mary Bowstred, spinster of Preston and daughter of George Bowstred. Occupied by Edward            Arnold and then William Barker.

1825 - Owned by Elizabeth Darton. Samuel Hobbs was a bankrupt. The Commissioners sold the dwelling

house or ‘double tenement with woodhouse’  for £52. Occupied by William Day who was still living there

1910 - Occupied by William Thrussell and Agnes (nee Burton). It was described as a brick and tiled cottage

with a kitchen and two bedrooms.  It was in poor condition.

The history of this cottage is frustratingly hard to research. It has been said that it was built in the seventeenth century or earlier and that the front wall of the house was constructed in around 1700. However, another survey in 1973 concluded that it was built in the eighteenth century. The first firm historical references to it are in the Hitchin Rates Books from 1801 to 1811 when the occupant was Daniel Morgan (and perhaps Daniel Pratt).

In 1811-1816,the owner was revealed as Joseph Darton and its occupants were Wilshire and Morgan. In 1836, it was noted that the ‘two cottages were now one’.

The carrier, George Read, and his wife Sarah were living there in 1836. However, they died in 1839 and 1846 and by 1851 their son, John Read, was continuing to work as a carrier from the property. Included in his household was a wheelwright, Benjamin Young (bn 1821c) which is worth noting as a wheelwright’s shop is noted on the property in 1884. However, like his parents John also died at a young age - in 1858, aged 35.

In 1871, possibly the house had been divided into two again with William and Mary Palmer and Thomas Wilson in situ. Thomas died in 1881 but the Palmers continued living there until the early twentieth century.

In 1910, the carpenter John Walkden had bought and was occupying the cottage. (In 1910, John was the landlord of The Chequers public house). His wife, May, ran a shop from the property. His household included the

The house was described as a red brick cottage (with a tiled roof half-hipped at the ends with two gabled corners) and shop with a living room, kitchen, pantry and four bedrooms. It was in poor repair.

Later in the twentieth century, the house was occupied by Ernest Jenkins (1930) Webb (1973) Arthur, Marie and Valerie Gainsford and Walter Steele (1981) and Robert GM and Mary CM Young (from before 1986). 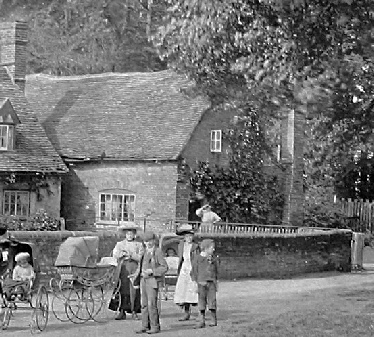 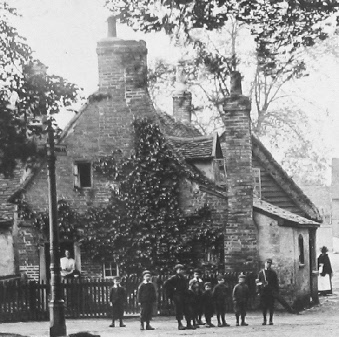 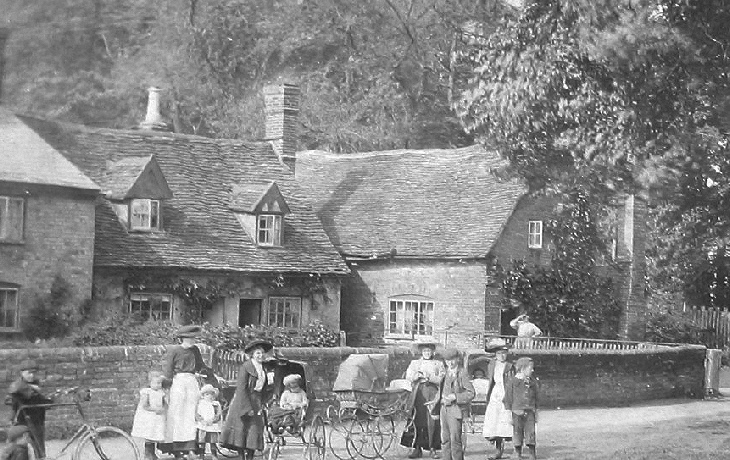 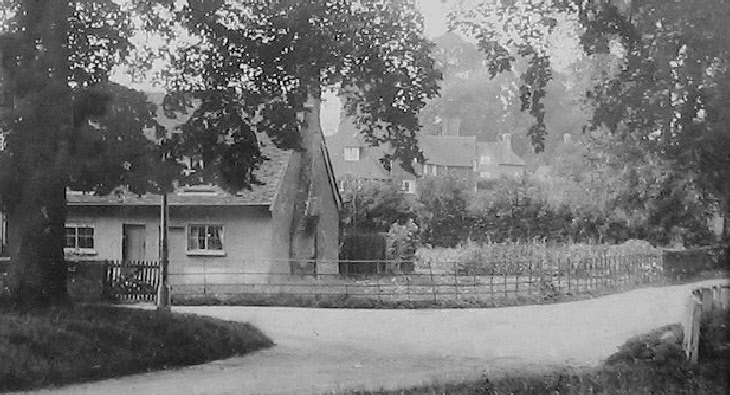 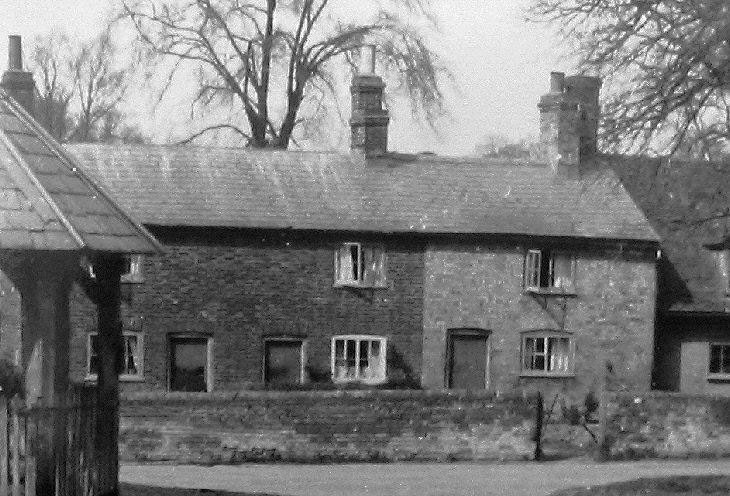 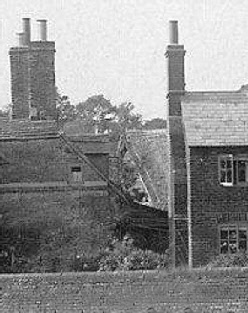 Bunyan’s Chapel. For a detailed history of the Chapel, see this link: Chapel 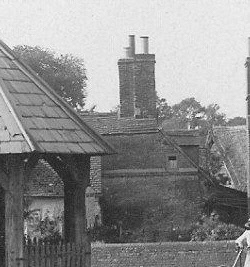 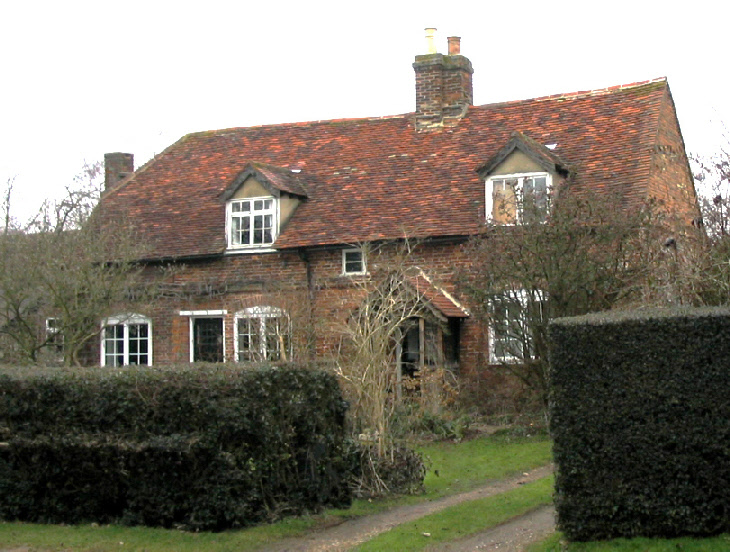