Recently, I was kindly given access to the Preston School logbooks. In October 1910, I noticed this entry:

‘Three girls from Preston School have written compositions for the Daily Mirror. They were printed in today’s issue’.

I had just read in a magazine that some newspapers had put part of their archives on-line. Could I find the Preston pupils’ essays?

The following was published on 11 October 1910. Although unidentified, there can be no doubt that this story relates to pupils from Preston School: 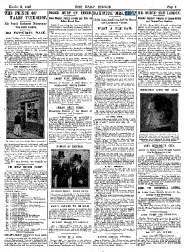 WHAT A FLY SAW

How children instinctively love neatness and orderliness in the home is shown by the following remarkable essays on ‘Mrs Tidy’ written by small schoolchildren.

These essays are a sequel to children’s compositions on ‘Mrs Untidy’ which appeared in The Daily Mirror last June in which the evils of the lazy, slovenly housewife were set forth with wonderful clearness and realism.

The following essays on ‘Mrs Tidy’ have been sent to The Daily Mirror by a school teacher who states that they are absolutely original and not altered in any way.

LIFE IN A COTTAGE

This is how one little girl, who imagines herself as ‘Mrs Tidy’, writes of her home and household duties:-

I am the wife of a gardener and I have one little girl and she is two years old.

We live in a cottage by the pond. I rise at six in the morning to get my dear husband a cup of tea before he goes to work.

After he has gone to work I have my own breakfast and I take Peggy’s upstairs and she lies in bed until I have finished my work and when I am ready to bath her.

When she is dressed, she goes out to play until she sees her daddy coming home to dinner, then she runs and kisses him.

Mrs Untidy comes in my home and she says, ‘How ever can you keep so clean?’ I say to her, ‘You could keep clean if you would only try’.

When we first got married, my husband had a bit of a temper, but I soon cured him of it. I used to get a nice meal for him and soon after he never would go out. He said, ‘I know which is the best – to stay in the home by the fire – because if I went out and spent my money, I should never have a nice home to live in like I have now.

My husband and me and our little girl are all quite happy and we love each other and we try to do our best and that is the reason we get on so well in life.

Another little essay writer who ‘keeps a sweet shop’ and whose ‘husband works on the railway at £1 a week’ has an ideal life. She writes:-

I am Mrs Tidy and my husband works on the railway. I keep a sweet shop in a rather large village.

I have to get up at five o’clock in the morning to get my husband’s breakfast so that he can be off by a quarter to six.

Then I wash up and get the housework done, except the dusting, by half past seven. I then go and wake up the children. I have four, three girls and one boy.

Their names are Dorothy, Ada, Mary and Frank. Dorothy and Mary are twins, nine years old, while Ada is ten and Frank, twelve.

While they are getting ready, I get mine and their breakfasts and they all start to go to school at twenty minutes to nine.

Well, as I was saying, when the children have gone, I get out my knitting or needlework whatever it may be, get washed and then take it to the shop and do needlework when there are not any customers in.

Another child imagines herself a little fly in the household of ‘Mrs Tidy’. The fly sees everything and knows everything:-

I am a little fly and I live in the house of Mrs Tidy. Mrs Tidy’s husband is a cow-man and each morning he rises at half-past five.

There are four small rooms in the house and I generally make my home in the kitchen because there I can get my daily feed from the table, but sometimes I venture into other rooms.

Mrs Tidy rises before her husband and tidies the kitchen so that they can enjoy their meal. Her husband milks the cows at a farm at six o’clock in the morning. He earns 16s (80p) a week.

Mrs Tidy is very careful with her money and does not spend it in waste. They have poor food but it is always well cooked.

Mrs Tidy never enters a public house because he is always welcomed by his wife in a cheerful home by a glowing fire.

After Mr Tidy has gone to work, Mrs Tidy commences her work. She clears the table, sweeps, cleans and dusts the rooms until the little cottage looks as clean as a king’s palace.

Mrs Tidy is always busy when she comes and Mrs Untidy said one day, ‘How is it that your house is always clean and mine dirty?’ and Mrs Tidy replies, ‘Because I am always working’.

This made Mrs Untidy angry and she said wicked words and said, ‘How can I keep tidy when my husband drinks his money?’ Mrs Tidy calmly answered, ‘Make your home clean and bright and he will enter it instead of the public house.’

Mrs and Mr Tidy are very healthy because they catch no germs from dirt in the house. Mrs Tidy has to work hard to pull through with her husband’s little earnings but she manages it and she is very happy while she works.

The little fly concludes her account by announcing her intention of paying ‘Mrs Untidy’ a visit.

From the files of the Daily Mirror

The Luton Times and Advertiser of 21 October 1910 added the following details:

are the writers of interesting essays which have been brought prominently to the notice of the public. The compositions which receive the title of "A day with Mrs Tidy" and in which is shown the children's love of neatness and orderliness in the home occupied a column in the "Daily Mirror"