The more I read about Edwin Lutyens, the more I am astounded that my humble grandparents lived in a row of cottages which were designed by such a famous architect.

The vista below is a personal favourite - it was the first welcome glimpse of my family’s home when we visited. From The Chequers the lane gently winds until the cottages slowly appear, framed by high hedges which part like curtains in a theatre. 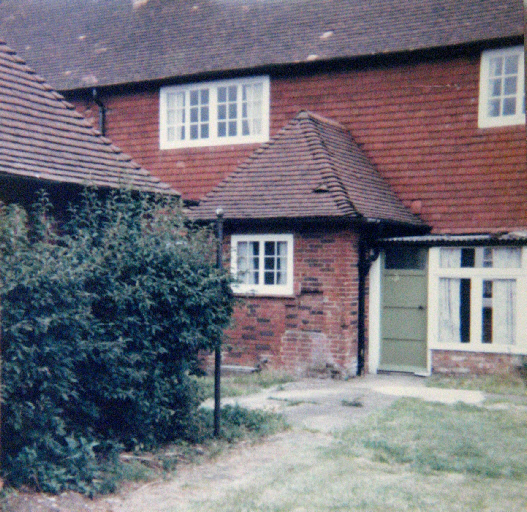 In 1913/4, Lutyens designed a row of six estate cottages  at Chequers Lane, Preston for Mr H. G. Fenwick of Temple Dinsley. They ‘show how Lutyens was able to turn the simplest of buildings into fine architecture’.

The row is symmetrical with a projecting cross-wing at both ends.The walls of the cottages are solid, with no cavity, built in Flemish garden wall bond which interposed ‘headers’ at every fourth brick. A patchwork appearance is achieved by mixing the colours of the narrow bricks which are dark red and blue.

The row is two storeys high - the first floor being hung with red tiles which have aged pleasingly. The roofs have a steep pitch and are made of red tiles which were hand made.The row had small-paned, flush, wooden casement windows and front doors constructed of vertical planks in wooden frames.

The distinctive appearance of the cottages is enhanced by the dominating chimneys - six square and fat along the ridge with a waisted cap and corner pilasters. Launched from the cross-wings are two imposing rectangular slabs of chimneys, each with two square shafts. They bear the Lutyens’ stamp.

At the centre of the row is a brick central passageway which is barrel-shaped and was originally the common entrance to the rear of the cottages.  The tunnel was eerily dark at night. I’ll always remember the crunch of the gravel as I passed through, the momentary pitch-darkness until I emerged in the sunlight - to be greeted, as often as not, by George Jeeves’ beaming grin. Then, running the gauntlet of Mr and Mrs Smith peeping out from among their geraniums in the porch of No. 4 and finally scenting Auntie Nan’s steak and kidney pudding.

The cottages had a kitchen with a black cooking range. No. 5 had a living room which ran from the front to the rear of the home and three bedrooms.

At the rear of the row are three single-story brick outhouses or storage barns which have hip-roofs. The central outhouse was divided by a passageway which continues the lines of the entrance tunnel. The outhouses mirrored the design of the buildings around the rose garden at Temple Dinsley. Attached to them were pumps that were connected to underground storage tanks which collected rainwater. I remember the pungent smell in these barns from the vegetable which were stored over winter.

The first three photos below are of the front and rear of Chequers Cottages circa the 1930s.

The photograph above is of the rear of 5 Chequers Cottages in 1977. 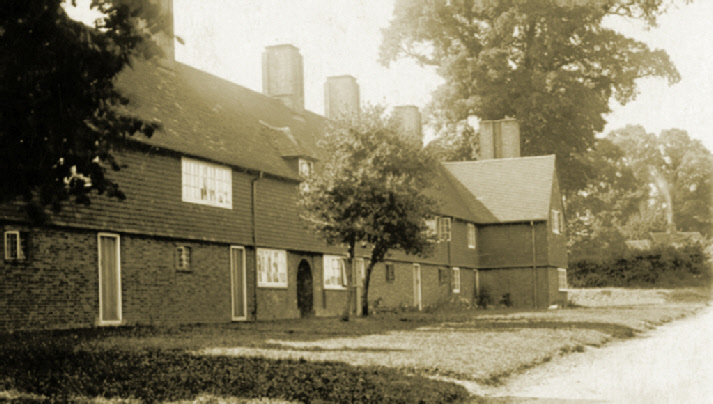 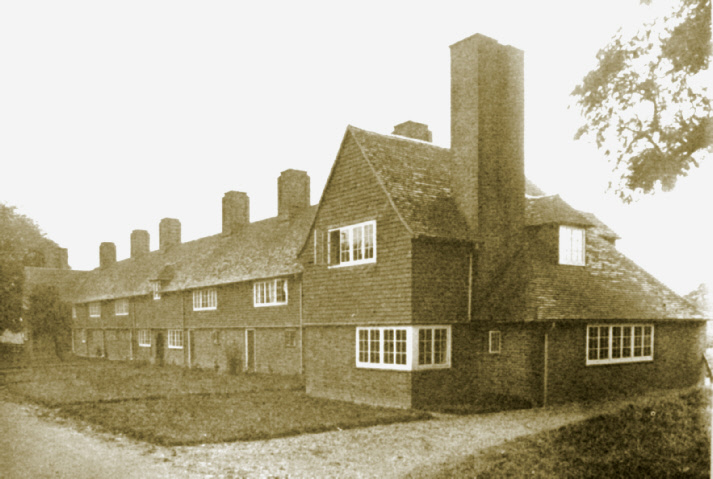 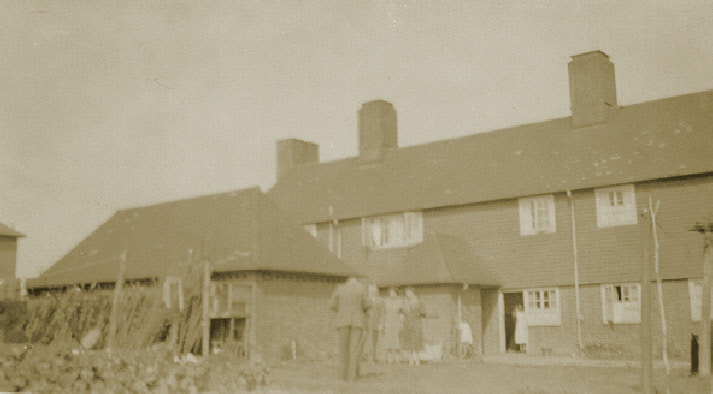 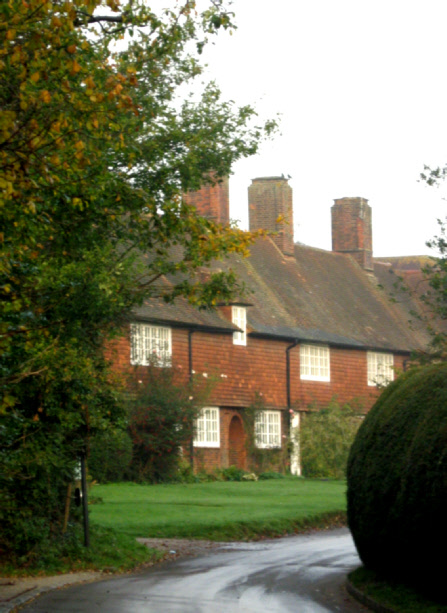 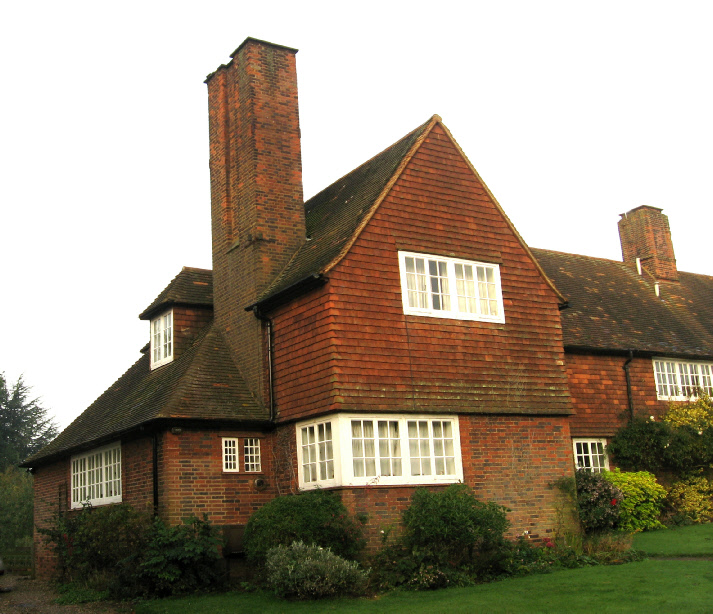 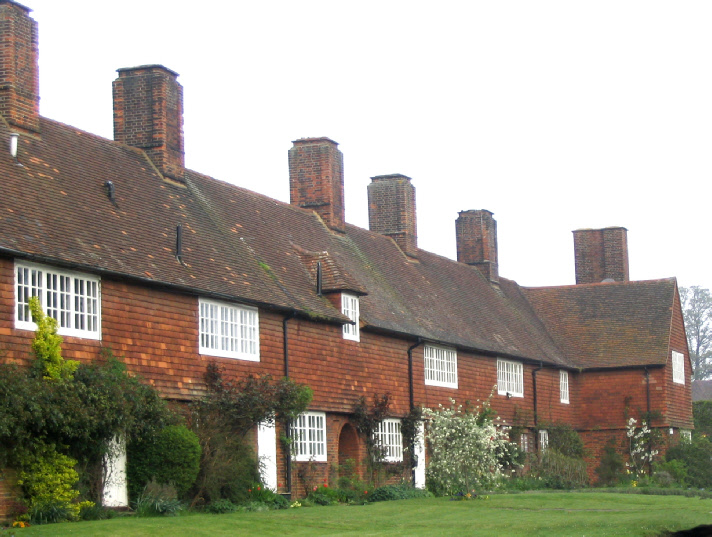 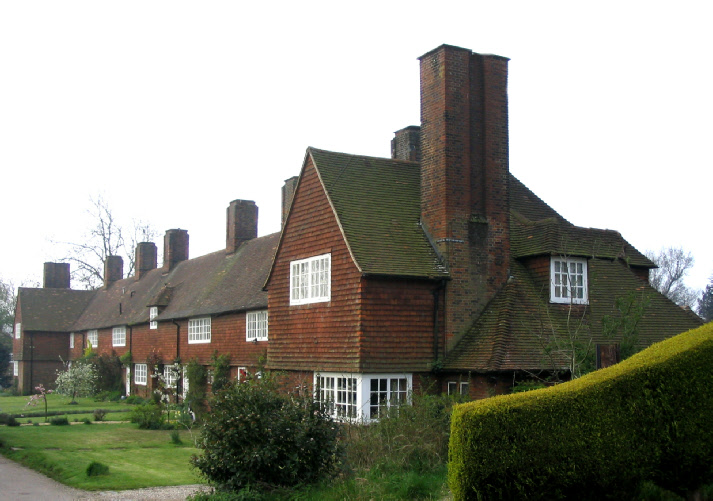 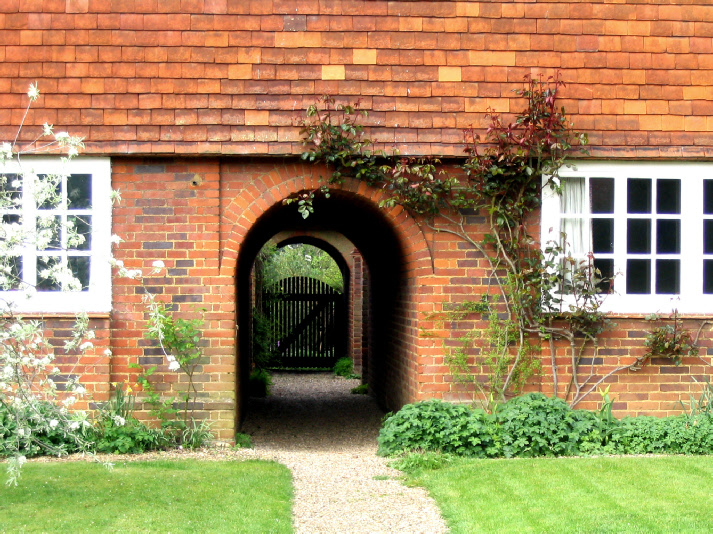