It is possible to trace the owners and occupiers of Pond Farm in great detail throughout the nineteenth century. The manorial records of Temple Dinsley, wills, census returns and maps of Preston furnish a wealth of information.

Ponds Farm 1841c. The fields noted in black were owned by Thomas Simmes;

the fields noted in red were owned by the Turners.

In 1780, the land that was part of Pond Farm, Preston a century later, was owned by two men:Thomas Simmes of Ippollitts and John Turner of that part of Preston in Ippollitts parish. Both were described as a ‘husbandman’ – that is, they were farmers below the rank of yeomen.

a) The house at Preston in Hitchin parish called ‘Ponds’. It was occupied by John Godfrey.

b) Nine fields or closes (totalling 23 acres) of arable land, meadow and pasture which were near the house. (These are shown in black in the map above.)

c) The field of seven acres at Preston called ‘Wellcroft’.

d) The field of six acres of arable land in Kings Walden parish known as Pitchley Close and a further acre of land ‘lying in’ Pitchley Close.

e) Three acres of arable land which lay in ‘Upper Kings Field’ and which were occupied by Charles Baron. Half of this land was near a chalk pit and abutted the road to the east; the remainder was next to ‘Kings Hill’.

Thomas Simmes had married local girl, Ann Whitbread, at Ippollitts on 15 August 1769. After Thomas died in the early 1780s, Ann inherited his estate but she also soon died and the items noted above a) to d) were bequeathed to the Reverend John Pilkington Morgan, vicar of Hitchin 1755-88 (‘a painful preacher’). However, as the clergyman predeceased Ann, the property was inherited by his only son and heir, William Morgan, of Bartholomew Close, London. The remaining piece of land (e) owned by the Simmes was bought by John Baron, a tanner from Hitchin.

William Morgan did not enjoy his inheritance for long as he died in 1797 and his wife, Jane Morgan of Little Britain, London inherited items a) to d). On 11 April 1811, she sold her inheritance at Preston to Charles Hill (who was already living at ‘Ponds’) for £1,200. (A previous occupier was John Young). Possibly to finance his purchase, Charles immediately mortgaged his newly acquired property to Richard Oakley of Offley for £500 and sold a small parcel of his land (two rods two perches which ‘laid into’ Painswood Close, Kings Walden) to Sir Francis Willes for £30.

Ponds Farm 1844 - with ponds. (The depression which formed the pond is visible today using Google-earth)

Charles Hill was born in about 1771. He married Mary Groom from Kings Walden on 5 January 1795 at St Mary, Hitchin. Based on the parish records of Ippollitts and Hitchin, details from Charles’ will and the records of Hitchin’s Back Street Baptist church, the couple probably had nine children. The family were living at Preston in 1801 when their daughter Ann was baptized and were certainly occupying Pond farm in 1811.

Ann Hill married William Dearman. In 1851 they were at Halls Green, Weston, Herts. William was a blacksmith.

Eliza Hill married William Rudd on 10 February 1836 at St Mary, Hitchin. In 1851, William was a baker in Willian, Herts.

Emma Hill married William Brown. By 1861 they had bought the Red Lion inPreston.

Charles was a prominent member of the Preston community and served as a juror of the Temple Dinsley Court Baron. He died on 12 October 1839, aged 68, and was buried at Kings Walden. Richard Oakley, the mortgagee of Ponds, died shortly afterwards, on 2 November at Harpenden, Herts.

Charles Hill’s will, which was completed on 4 October 1839 (just before his death), is crammed with information about his family which cannot be found in other sources. His executors were his son-in-law, William Brown (who was to buy the Red Lion in Preston) and James Titmus who was farming in Poynders End. Charles did not sign but marked his will and the will was witnessed (and signed) by Daniel Morgan, a labourer who lived in nearby Sootfield Green. The following were Charles’ bequests:

a) Four cottages at Whitwell (opposite the Bull Inn) were left to his daughter Charlotte, wife of Daniel Queenborough.

c) Mary, Charles’ widow was bequeathed three more cottages in Whitwell which were occupied by Gatward and another as well as Charles’ ready money, debts owed to him, securities, farming stock and implements of husbandry and the use of the furniture in his house which was to be divided between her surviving daughters at her death.

After inheriting ‘Ponds’, two years after his father’s death in 1841, Benjamin bought more land and a house for £370 from Richard Oakley. This property had been owned by John Turner until 1781 and its purchase completed the property which was Pond Farm in 1884.

Turner’s property consisted of a house and three fields totalling three acres which adjoined the house. Previous occupants of the fields included Benjamin Gootheridge and William Harding. John Turner had bought the property from John Morgan in 1778. He mortgaged them to Elizabeth Simpson of Hitchin for £80 in 1782.

By 1788 the three fields were farmed by George Groom, John Brown and John Turner’s son, James. John had died and by his will dated 6 March 1785, his entire estate was left to James. Twenty years later, in 1806 James Turner mortgaged his property to William Wilshere Esq. of Hitchin for £165. In 1811, James sold the property (which included outhouses, barns, stables, yards and orchards) to Richard Oakley for £270 – which is how Benjamin Hill was able to purchase it from Richard in 1841 for £370.

Benjamin married Hannah Pennyfather from Datchworth, Herts at St George Hanover Square, London in the summer of 1839 and the couple had at least three children – the eldest, Ellen was born at Tewin. The censuses from 1841 to 1861 record that Benjamin was farming at Preston with a holding of 70 acres, employing two men and two boys.

Benjamin was a pillar of local society as, like his father, he served on the jury of the Temple Dinsley Manorial Court Baron. He was involved in a court case in 1841 when Henry Stratton, (one of Benjamin’s farm labourers) was charged with leaving his service without the consent of his master. Stratton was reprimanded and discharged on paying the expenses incurred. Then two years later, Benjamin was fined 30/- including costs for assaulting his shepherd boy, Charles Stevens, who stated that his master knocked him down and that when he got up, his master ran a two-tined fork through the top of his hat into his head, making it bleed

Ellen Hill married John Campkin in the city of London in September Qtr 1867. She died at Runcorn Reg District in the December Qtr 1868

Harriet Hill married William Dobney in the June Qtr 1862 in Hitchin Reg. District. In 1871 they were living at Finsbury London and William was a railway foreman.

William Hill married Christian Parker from Luffenhall, Herts and was farming at Hertingfordbury in 1881.

Benjamin died on 15 January 1871.By his will dated 27 July 1870, his estate was bequeathed to his wife, Hannah, Daniel Pennyfather, farmer of Colts Farm Datchworth (Hannah’s brother) and Thomas Campkin, farmer of Broomhall, Watton, Herts (brother of John, Benjamin’s son-in-law). Hannah was to receive the rents from her late husband’s property. Soon after Benjamin’s death, Hannah was living with her unmarried son, William at Birchall Farm, Hertingfordbury. Although William was only 26, he was running a farm of 220 acres.

In 1871, Ponds Farm was occupied by 25-year-old Nicholas Toke with his wife and young son.

Hannah leased Pond Farm from 29 September 1877 to Stephen Marriott, of neighbouring Castle Farm, for 15 years and he installed his son, Thomas at the farm. Hannah was living at Hope Villa, Stevenage at the time and four years later, Hannah was living alone at London Road, Stevenage. Hannah died on 13 November 1883 and seven months later, on 29 June 1884, Ponds farm was sold at the Sun Hotel, Hitchin by Benjamin’s surviving trustee, Thomas Campkin.

The Sales Particulars well describe the farm, where a new house had recently been built – evidently replacing the old farm house. Pond Farm was ‘a very enjoyable prettily timbered choice estate’ with a newly-erected dwelling-house, with a garden and paddock orchard. The house was well placed on rising ground with extensive views of the surrounding countryside.

The house had an entrance; two front bedrooms and a large back bedroom measuring 23 feet by 14feet; a servants bedroom, two staircases; two comfortable and cheerful sitting rooms (one with a marble mantelpiece); a large kitchen with a brick-built oven, a pantry and dairy and a large brick and tiled cellar. 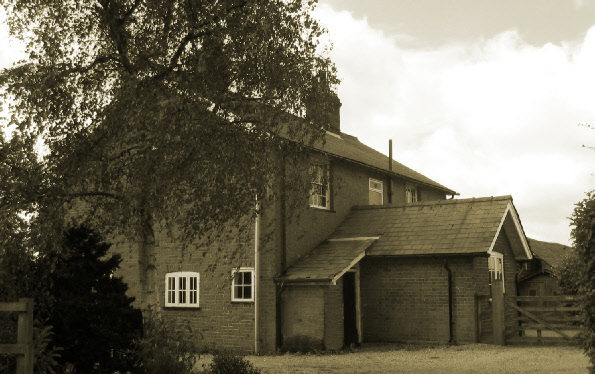 The farm land consisted of old pasture and market garden land of 40 acres which was ‘considered to be some of the best land in the neighbourhood’ with perfect drainage due to the nature of the soil.. If the hedges were judiciously removed, it would be ‘a pretty little park’. There were ponds of water on the property – hence its name, presumably - including one which was fed by a spring which had never been known to fail.

It was a well-arranged and substantially built farmer which had been recently erected. It had a cattle yard partially enclosed by brick wall; a brick-built and slated open cattle shed; a stable for four horses and a chaff house; a loose box or piggery, three-bayed open cart shed. A granary and a hen house. Nearby were two brick, timber and thatched buildings which were a cow house and a corn barn.

Finally (as with the sale of Temple Dinsley ten years earlier) a selling point of Ponds farm was that it was well calculated for a hunting lodge being near the Hertfordshire and Puckeridge fox hounds.

The estate was sold for £1375 to John Harvey Lovell of Bedford Sqaure, Brighton and George Bryan Milman, a lieutenant-general from London. In January 1885, the new owners bought the freehold to the estate from the lord of the manor for £375.

Six years later, in 1891, Benjamin’s daughter, the widow Emma Brown, was living at the property with her spinster daughter, Matilda. At the turn of the century the mineral water manufacturer, Nelson Jones and his wife were living in the house.

There was a succession of occupiers of Pond Farm from 1901:

The recently-built Pond Farmhouse in 1898 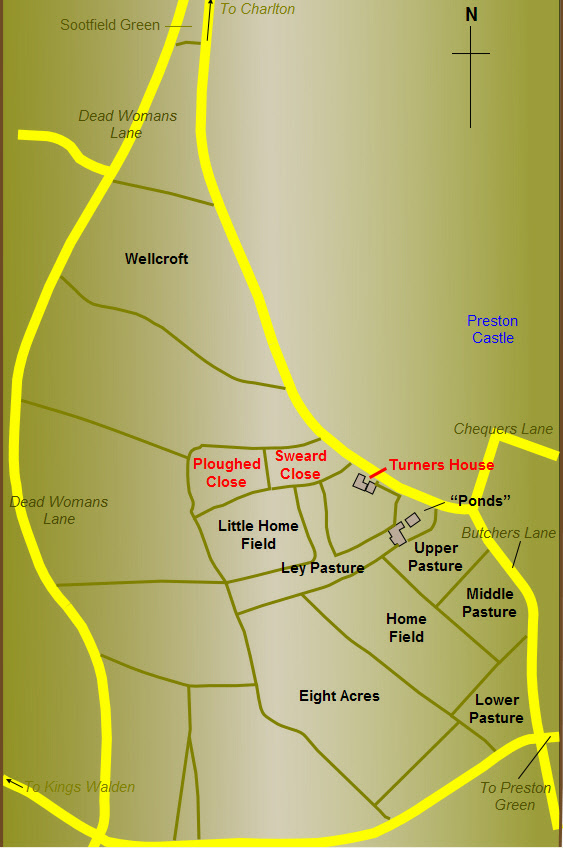 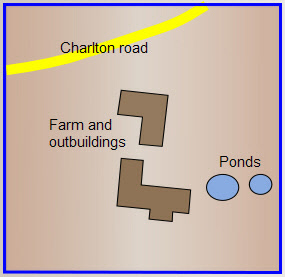 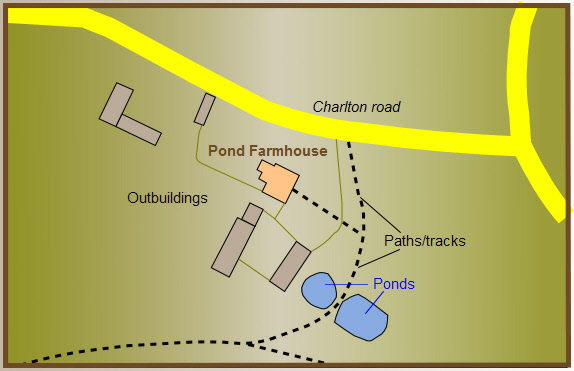 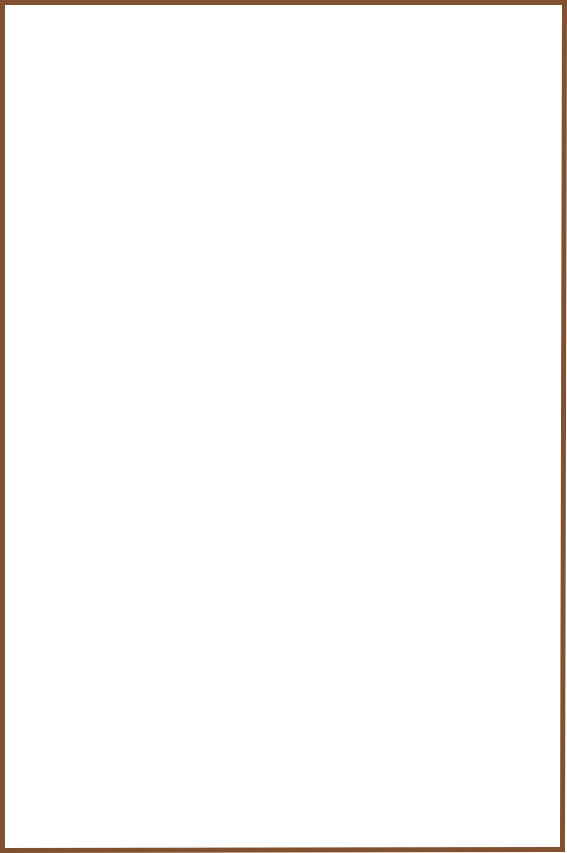